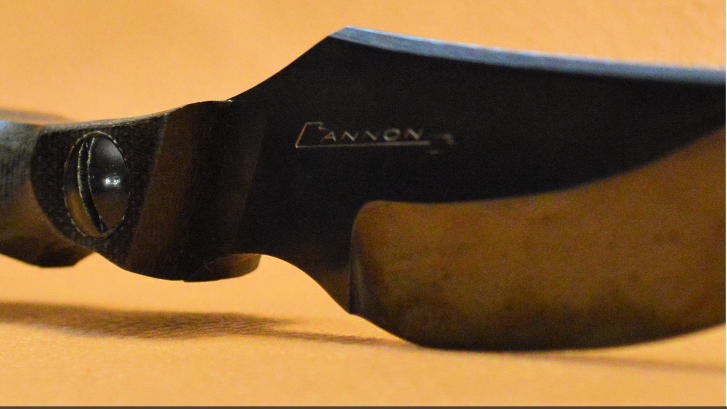 As a professional forester, Wes had many worn out saw chain guide bars lying around his shop and he decided to test them as blade material. He found that the knives crafted from these guide bars worked very well. They were relatively easy to sharpen and held an edge under tough conditions. Wes stated that:

“The constant throughout my knife making evolution is my desire to re-purpose steel to give it new life as a blade. “

As word of Adkins Wood and Knife began to surface, Wes reached a point where his worn out bars could not keep up with blade demand. This is when Wes reached out to us at Cannon Bar Works about acquiring our seconds as the material source for his knifes. We were very intrigued by this and of course agreed!

“Cannon steel is used in nearly every blade I create. From hunting knives, to machetes and tomahawks, each client wields a piece of re-purposed Cannon steel. My knives and edge tools can be found in the hands of hunters, collectors, outdoors enthusiasts, and the armed forces and have served clients from Alaska to Afghanistan.”

Recently, Adkins Wood and Knife designed the Cannon ‘Superknife’ as a tribute to our “outstanding guide bar”. It was cut from Cannon steel, hand-crafted, and finished utilizing the same black magnetite process as Cannon.

“In the woods I run a Cannon SuperBar on my saw for felling operations and I can honestly say that it is far superior to any other guide bar I have ever ran. In the same fashion the Cannon steel continually produces equally outstanding knives and edge tools.”

Wes Adkins makes all the knifes in his garage/converted shop space out of his own home in Iowa. The production of these knives allow Wes to use his creativity while providing clients with exactly what they are looking for. He prides himself in being a fully American Made company and has actually been nominated for a Martha Stewert American Made Grant, his nominee page can be seen here (voting starts September 21, 2015). We greatly admire Wes’s work and are so happy to have the relation we do with him and his amazing company!